skip to main | skip to sidebar

My husband and I don't really celebrate Valentine's Day but we do celebrate pink frosting and pink sprinkles, so when Shawn brought home these pretty treats from Watercourse Bakery on Sunday, I didn't protest. 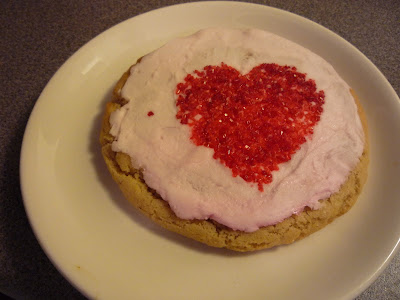 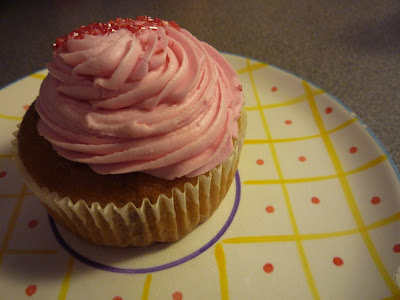 Apologies for the lighting. Just pretend it's "romantic."

Far more important than Valentine's Day this month was the reopening of Sweet Action, which was closed for the month of January. We stopped by last weekend and enjoyed some vegan cinnamon roll ice cream, which features swirls of Watercourse's cinnamon roll filling as well as pieces of cinnamon roll. These fools don't mess around. 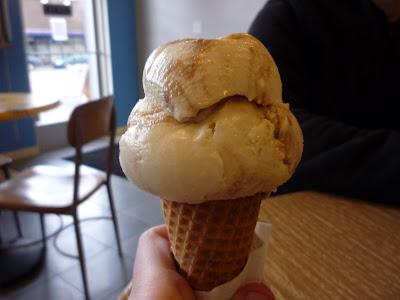 Saving the world, one vegan bake sale at a time 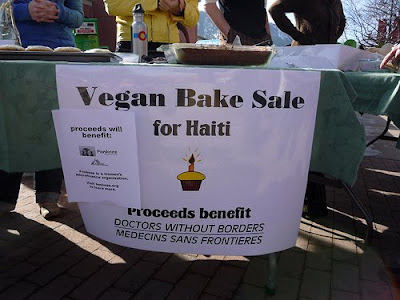 A few weeks ago I participated in a vegan bake sale to raise money for the relief effort in Haiti. The bake sale was held in Boulder, where I met some lovely people and sampled some delicious treats. My contributions were oatmeal cream pies and chocolate peanut butter whoopie pies, because, seriously, who doesn't love a cookie sandwich? The sammies were a big hit, if I say so myself, and were accompanied by rows of luscious cupcakes, cinnamon rolls, zuchinni bread, donuts, and various other delectable vegan treats which were met with great reception. It was a fun and inspiring day, to be sure. We raised around $2800, and all together vegan bake sales around the country (and Canada!) have thus far raised almost $40,000 for Haiti. It's times like these when I'm especially proud to be part of such an amazing community. 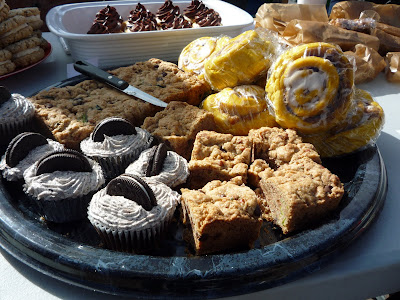 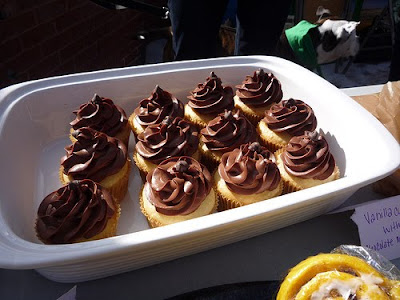 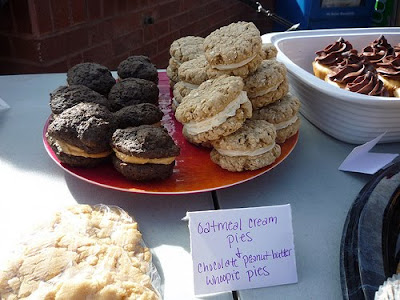 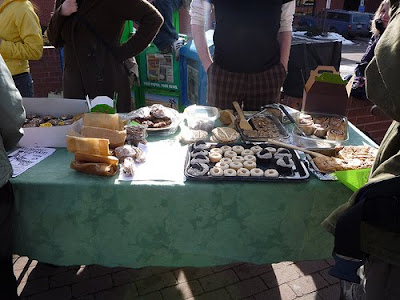 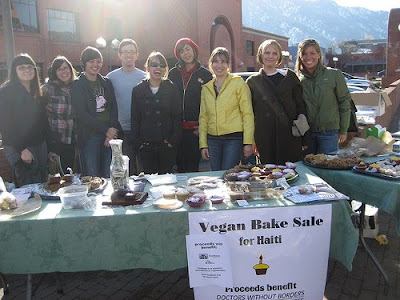 group shot courtesy of Rachel
Posted by Becca Elouise at 2:35 PM No comments:

A snow day, some pancakes 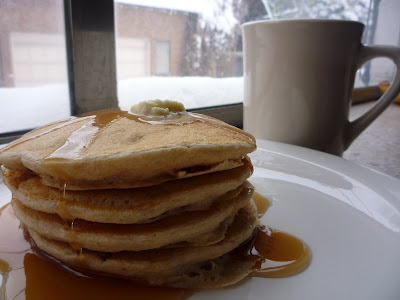 This post is all kinds of late considering the snow day in question was over a week ago, but I've been hella busy, so just humor me. Last week Colorado was hit with a pretty ridiculous snow storm and, since no snow day is complete without a hearty, lazy brunch, I made banana pancakes, the perfect start to a day of reading comic books, drinking warm beverages, and watching the never-ending snow accumulate outside. This sudden winter storm in October pissed a lot of people off, but the Florida kid in me still gets a little giddy at the sight of snow. The weather in Colorado is notorious for constantly changing, and I rather like it. Last week we received 15 inches of snow, and today, as I type this, it's in the 70's and gorgeous outside.
Posted by Becca Elouise at 12:47 PM 2 comments:

My husband's birthday was this past Sunday, and it's the one time of year I'll cook whatever he wants regardless of how unhealthy or expensive it may be. On that note, he requested his usual cheesecake (only on his birthday can I justify buying three tubs of Tofutti products at once) and double bacon cheeseburgers. I considered making homemade burgers and tofu bacon, but Shawn wanted a more authentic burger experience, so I used Boca burgers and LightLife bacon strips. I did, however, make a homemade cheese spread, using the grilled cheese recipe from Vegan Vittles. The burgers were served with sweet potato oven fries, of course. 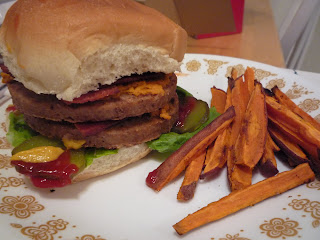 Messy and deliciously gross - just how a good burger should be, I say. 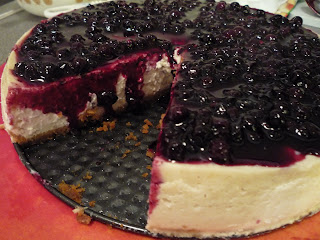 Blueberry cheesecake. Recipe from Delicious Choices, though I made a different crust.

For Shawn's non-edible gift, I bought him a keyboard stand so he could finally stop playing keyboard on the coffee table. 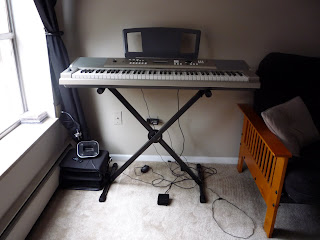 Without getting too mushy, I'd like to take a moment to gush about the birthday boy in question. My husband is my favorite person in the entire world. We were best friends for two years before we started dating, so when I say that he's my best friend, I mean it. He is smart, silly, compassionate, nerdy in all the best ways, supportive, impossibly handsome, and hilarious. We are endlessly compatible; he's basically me with a penis and a higher IQ (so really, he's the perfect man*), and I can't imagine my life without him.
*Except that he snores. 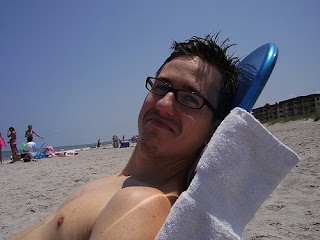 So, there's an Asian restaurant within walking distance of my apartment that serves this Vietnamese char grill bowl, which consists of rice noodles, grilled tofu, cucumber, lettuce, bean sprouts, tomatoes, and a chili-lime sauce. The tofu in this bowl sets it far above similar dishes served at many other Asian restaurants. It is charred to perfection and has a smoky, sweet flavor. There's just one problem: I recently found out they put fish sauce in that shit, and apparently cannot make it without. Really, it's my fault for not checking sooner, but when I learned this I was devastated - for about two minutes. Then I was simply inspired to make my own. 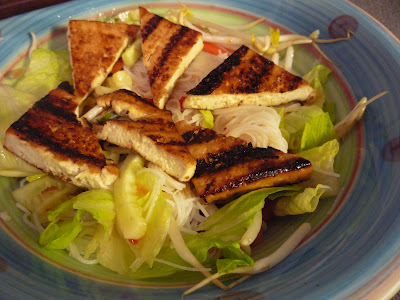 I marinated the tofu in soy sauce, mirin, maple syrup, a tiny bit of sesame oil, and crushed garlic, and then grilled the shit out of it. The chili lime sauce consisted of sweet chili sauce, lime juice, and fresh mint. I included the same veggies that are in the original dish, and it was perfection: every bit as good as the restaurant version, and certainly better for the fish, the ocean, and my conscience. I can definitely see it becoming a regular in my kitchen.

This was fairly easy to recreate at home, but it can be frustrating to learn that a favorite food contains animal products. However, one of the many things I love about veganism is the ingenuity it catalyzes. Sometimes you are forced to take matters into your own hands and into your own kitchen, and the result is often far more satisfying when it is a product of your own culinary toil and, of course, is cruelty free.
Posted by Becca Elouise at 11:30 PM 1 comment: 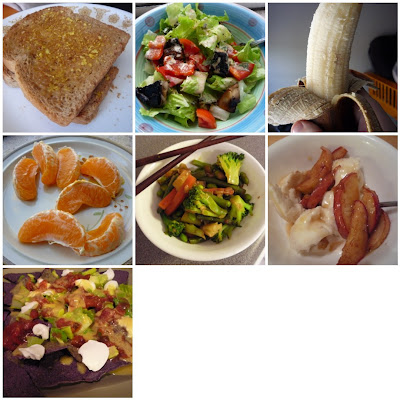 It's that time again. I know how excited you must be.

- Toast with Earth Balance and nooch. I usually have cereal for breakfast but was craving something more savory.
- Romaine, grilled portobellos, grilled red pepper, tomatoes, and cucumbers with miso-tahini dressing (dressing recipe from Veganomicon. It's super easy, creamy, and flavorful. I added some fresh parsley since I had it on hand.)
- Banana
- Tangelo
- Stirfry with edamame
- Vanilla So Delicious with sauteed apples and caramel sauce (caramel recipe from Don't Eat Off the Sidewalk)
- Nachos, split with Shawn for a late night snack whilst watching reruns of The Office. Tortilla chips, nooch sauce, Tofutti sour cream, lettuce, salsa, avocado.

On an entirely unrelated note, Shawn and I got the chance to meet and hear speak one of our favorite writers, Michael Chabon, at a book signing tonight at Tattered Cover, a large indie bookstore here in Denver. He is most noted for his Pulitzer Prize-winning novel The Amazing Adventures of Kavalier & Clay, which is indeed superb, but my favorite work of his will always be Wonder Boys. (When I told him as much, he said that he probably agreed. OMGwehavesomuchincommon.) He was just as witty and articulate as I expected him to be, but was also warm and kind and, I might add, rather fetching. 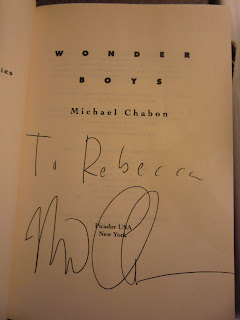 And to honor this fact, I've made a list of my five favorite dishes from restaurants in this fair city. Denver really is full of delicious vegan food, so narrowing it down to five proved to be a rather difficult task. Here they are in no particular order:

1. Biscuits and gravy topped with tofu scramble, Watercourse
This is hands down the best biscuits and gravy I've ever had the pleasure of shoving into my gob. The biscuits are savory and fluffy and the gravy is thick and seasoned just right. You can order the b&g with or without the tofu scramble on top, but not getting it would just be...stupid. 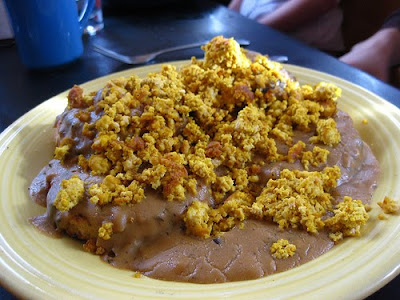 There are delicious biscuits hiding under there somewhere, I promise.

2. Salt and pepper golden tofu, L'Asie Fusion Bistro
Crispy, spicy salt and pepper tofu served on a bed of sauteed peppers and onions with a ginger sesame dipping sauce. A delicious appetizer or a delightful late night snack (well, L'Asie closes at 10 so it's more like pre-late night, but the point is my husband and I sometimes just get an order of this to go as a snack because it is so. damn. good.) 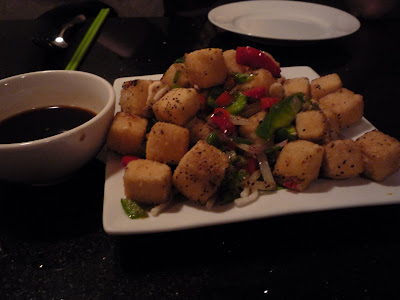 3. The Dona Lee, Watercourse
Crispy seitan, avocado, tomatoes, and vegan ranch dressing wrapped in a warm pita. Yeah buddy, just ponder that for a little while. And then, you know, wipe the drool off your chin.

4. Seitan buffalo wings, City, O' City
You can also find these wings at Watercourse, which is City O's sister restaurant, but I associate them more with City O' since it's a bar and this is bar food. I've had various vegan incarnations of buffalo wings from a couple of different restaurants around the country, and these are by far the best. Likewise, the creamy, herbed ranch dressing they are served with (the same dressing found in the aforementioned Dona Lee) is the best I've had anywhere. City O' City also has teriyaki wings which are coated in a faintly sweet, gingery teriyaki sauce. While not quite as good as the buffalo wings, the teriyaki wings definitely stand on their own and are a milder alternative. Like their spicy counterpart, the teriyaki wings are served with ranch dressing, which is kind of ridiculous and doesn't really work as a flavor profile, but the ranch is so good I usually dip the wings in it anyway. And then I feel I so very American. 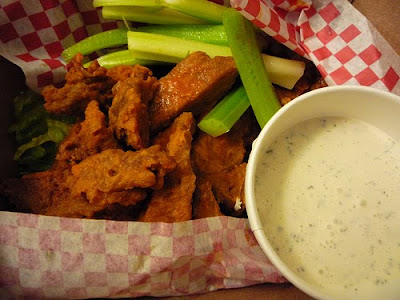 5. BBQ Chicken Pizza, The Rebellion
I've gushed about this delicious pizza twice already on this blog, so I'll spare you more of the same. And the truth is that virtually any pizza from Rebellion would be worthy of a slot on this list because the combination of that fluffy, organic crust and perfectly-melted FYH can do no wrong. (But seriously, the bbq chicken is the best. Go get some right now.)
Posted by Becca Elouise at 2:21 PM No comments:

This shit is vegan, y'all.

All of the food and recipes on this blog are vegan and thus do not contain animal products of any kind, including dairy, eggs, gelatin, etc.